I am a dedicated follower of fashion, despite the fact that I don't rock a lot of personal glamour myself.  But I can dream about being a style maven, right?  Here are a few books that help me live the dream:

This is a gorgeous book, the catalog from an exhibit that just ended in August at the Metropolitan Museum of Art.  Elsa Schiaparelli was a designer in the early decades the the 20th century, perhaps best remembered these days for getting Wallis Simpson, future Duchess of Windsor, kitted up in a dress with a lobster painted on the front - a motif inspired by the Surrealists, including Dalí.  Don't miss these "conversations" between Schiap & Prada on ugly chic, the exotic body, waist up/waist down, & more! 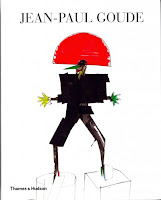 This beautiful & sometimes explicit collection is not for the faint of heart!  A selection of photos & images by Goude, "designer, illustrator, filmmaker, even choreographer". Goude has made commercials for Kodak & for 10 years was in charge of Galeries Lafayette's advertising campaign, but I especially enjoy the images of his "muse", Grace Jones.

Coco Chanel: The Legend & The Life by Justine Picardie

I don't think you can have a proper fashion biography without a lot of pictures, & this book is satisfyingly chockablock with photographs & drawings. Full disclosure: I haven't read it yet, but with chapter headings such as "Mademoiselle is at home", "The Little Black Dress", & "Through a Glass, Darkly", this book is calling to me. I'm even more won over by the blurb: "...this beautifully constructed portrait gives a fresh & penetrating look at how Coco Chanel made herself into her own most powerful creation". 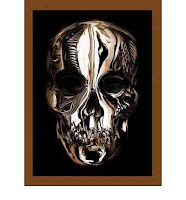 Another Metropolitan Museum of Art exhibition catalog! Alexander McQueen, a British fashion designer who died in 2010, left behind a stunning design legacy, as reflected in this catalog.  McQueen's creative vision was informed by one of his favorite quotes, "Love looks not with the eyes, but with the mind" (also tattooed on his arm), & he was not afraid to shock with his collections. His style includes the use of kimono style, references to Julia Margaret Cameron's photography, & touches from nature (antlers & shells).  Don't miss page 132.  It just makes me happy. 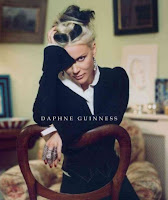 I picked up this book because it came up in a search of the catalog on "fashion", not knowing a thing about Daphne Guinness.  Turns out she's a granddaughter of one of the fierce Mitford sisters!  A friend of Alexander McQueen! & a fashion icon, who not only collects couture but is a "designer, editor, model, muse, & stylist" [from the inside cover]. In this book she displays her personal style in a wide variety of photographs, from family photos to shots by Mario Testino.  Vogue editors, photographers, & fashion designers (Valentino & Philip Treacy, to name but two) declaim her style sense with admiration, if not downright awe.  Pick up this book for the hats alone, & stay with it because she is such a character.  & enjoy the metal gauntlet gloves she designed herself.