Harvest festivals, arts & crafts shows, fiestas -- each weekend ripe with possibilities, and the quandary of where to spend your time first.

Visitors from out of town, coming to enjoy New Mexico at its best.

Which means partying, and hosting, and cooking New Mexico style.

New Mexican cooking is a unique blend of Mexican, Native American, and European Spanish cuisine, with some gourmet bits added in from other cultures -- and even a bit of cowboy cooking. Many New Mexican dishes are quite simple but allow for a wide range of personalization. Even something so straightforward as a pot of posole, corn hominy, can have as many ways of being prepared, spiced, and presented as there are cooks making it.

One of the delightful things about cooking New Mexico style is that the basics are easy to grasp, but one can always learn new ways to improve upon or customize classic dishes. Or experiment with new dishes, guided by recipes collected from around New Mexico.

"New Mexico recipes" is a tag that has been developed and applied to books in the collection that feature, not surprisingly, recipes from around New Mexico. Searching on that term is a great way to explore the wide world that is New Mexican cooking. (An adventure guaranteed to make one hungry.) You'll be led to dozens of cookbooks containing hundreds of recipes -- more than enough to get you started if you have never cooked New Mexico-style before, or to help you explore new directions in your cooking.

To help you go even deeper into the wonderful world of New Mexican cooking, library staff have added community tags leading you to specific recipes. So, a search for biscochitos leads you to 19 books with biscochito recipes, green chile stew results in 20 hits, and you'll find at least 27 different ways to make posole.

Less commonly-known New Mexican foods are represented too. You'll find out how to make atole (corn meal mush, "New Mexican chicken soup"), how to prepare quelites (wild greens), different ways to spice calabacitas (squash), how piki bread is made, and how to use panocha flour.

If you are new to the region's cooking or wish to expand your repertoire, you can also try the "cooking with _______" tag phrase. This will lead you to resources that have not only recipes but also general discussions and techniques for cooking with distinctively New Mexican ingredients.

The chile pepper -- green and red, mild to fiery, reputedly addictive, very versatile -- is of course the most famous single ingredient in our cooking, and searching on cooking with chile, cooking with green chile, and cooking with red chile will lead you to many resources. But there are many other ingredients that go into New Mexico's cooking, and the "cooking with" tag prefix will help you learn how to use them. Here is a sampling: 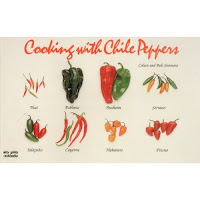 The cooking with ______ search also helps you find resources with guidelines for using the other types of peppers sometimes used in New Mexican cuisine, like jalapenos and ancho, pasilla, poblano, serrano, habanero, and bell peppers.

As we go into the "high cooking season", with holiday parties ahead, you might want to brush up on how to produce quesadillas and salsas for appetizers, and enchiladas and tamales for the masses.With cold weather coming you'll want a big batch of caldillo (green chile stew) available to warm your visitors, and tortillas to go with. You'll want to have empanadas, empanaditas, and biscochitos at hand, for nibbling and as visiting gifts. How could you start a day exploring New Mexico without huevos rancheros or that classic breakfast burrito?

And of course where would a holiday party in New Mexico be without a huge pot of posole on the stove, inviting everyone to scoop out a bowlful? Posole is just about the perfect party food -- you can feed lots of people cheaply, it just gets better the longer it simmers, and each person can customize each bowlful with different toppings. It is a tradition in many parts of New Mexico to eat posole on New Year's, for luck in the coming year and assurance that you won't go hungry, just as black-eyed peas are eaten in the South.

Here is just a partial list showing the variety of the recipe tags you can explore. If you are feeling adventurous, check out the "Related Searches - Additional Suggestions" list on the lefthand side of any of the link results, then look through it until you find a term you've never before encountered. That book is certain to lead to some delicious new New Mexican food experience. 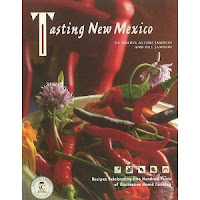 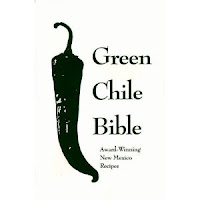 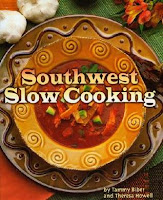 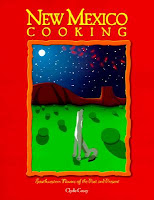 "Chili" or "Chile"? In some older cookbooks you might see references to "chili peppers". But it's official: in New Mexico, it's a chile pepper. "Chili" is reserved for the Tex-Mex dish with beans.


"Red or Green?" -- the Official State Question of New Mexico, heard at restaurants. The waitperson is asking if you want red chile sauce or green chile sauce with/over your entree. If you want red and green, the answer is "Christmas!"
It's the same seed. Some people will tell you that you plant different seeds to produce red or green chile plants. (And, if they are really pulling your leg, they will even say the seeds are the appropriate colors.) But a red pepper is simply a ripe green pepper. Similarly, a mild green pepper will dry into a mild red pepper - the drying process does not change the heat.﻿
﻿

The pepper may be red or green, but the heat is in the yellow. In a hot chile pepper, the bulk of the heat-producing capsaicin is on the filets or veins inside the pod. The hotter the pepper, the bolder will be the yellow dots along those veins, and in the hottest chiles those dots will have combined into a yellow stripe. Stripping out the veins will remove quite a bit of the fire, but not all -- a hot pepper is still a hot pepper, particularly in the flesh of the upper third of the pod nearest the veins and seeds.

Smaller is usually hotter, but not always.  Generally speaking, a finger-slim pepper will pack more of a burn than something shaped like a bell pepper. But that old rule-of-thumb has been challenged by cross-breeding of pepper plants. Some other classic indications of heat in chile: angular rather than round "shoulders" on the pod, a sharp point or curl on the tail of the pod, and the head of the pod indented in around the stem. But the only sure way to test the heat of a green chile pepper is to "twist the head off" -- crack it open near the top third, and look at the veins for the distinctive yellow stripe. If it's very hot you can smell the heat as soon as it pops. If there is any lingering doubt, merely touch your tongue to the inside of the pod -- a hot pepper will immediately make itself known!

I need my chile fix! While chile is not technically addicting, people certainly habituate to it and develop cravings. The capsaicin in chile causes an endorphin release in many people, similar to the "high" some people get from exercising vigorously. New Mexicans living elsewhere deeply appreciate getting chile from home.

Bless You! Hot green chile produces a wide variety of reactions in people -- some folks sweat or turn red, while others cough, burp, hiccup, or sneeze. Some say hot chile makes their ears ring, while others claim that their ears pop "once for every 10 degrees". Regardless of the reaction, there is no question that chile can have a marked physiological effect on folks, adding to its reputation of being addicting.

"Hatch" chile is not a particular type, but peppers from the noted chile-raising region around Hatch, New Mexico. The town is home to the annual Hatch Chile Festival, celebrating their most famous product. While the majority of the commercial crops are grown in the southern half of the state, chile is grown statewide.

Chile peppers crossbreed very readily, and are affected by weather and soil conditions. Which means that new strains may arise, and "classic" strains are highly prized. Aficianados say they can taste the difference in chile raised from the same seed but in different fields -- making it the New Mexican analog to fine wines! Some of the Pueblos have distinctive strains of chile, the seeds carefully preserved and handed down; even some individual families have their own strain of chile. New strains are also purposely bred and developed for hardiness, disease/insect resistance, and flavor; the New Mexico State University in Las Cruces has been especially productive of new strains.

While much is made of heat in chile, New Mexicans typically prefer rich flavor over a simple burn. It's true that there are some "fire eaters" who seek out the hottest peppers, as a matter of pride (or are we nudging up against addiction again?) But most classic New Mexican dishes have a rich chile flavor with only a pleasant "burn" afterward.

Chile powders come in a variety of forms. The classic chile molido ("ground") is a rich dark red in color, and has a texture almost like coffee grounds -- just the dried pod is used to produce this. Pale red molido, on the orange side, usually indicates that the seeds were ground in as well for more heat (though it may also indicate that the powder is very old.) Chile caribe ("crushed") is a mix of bits of the dried pod and the seeds, similar to the "crushed red pepper" packets you find in pizza parlors. Over the last decade or so green chile molido and caribe have becoming increasingly common, allowing that distinctive flavor to easily be added to dishes; green chile powder can also be shaken over food as you would use other spices. The volatile oils in chile powders are affected by heat and light so cool dark storage is recommended, with freezer storage in a tight container the best of all.

Before freezing became a common way of storing roasted green chile, people often sun-dried green chile. It was either spread flat on trays or screens, or pods tied together by the stems were hung over clothelines, with cheesecloth around them to keep the insects off while they dried. Roasted green chile dried this way keeps well and has a sweet, smoky flavor -- this "chile jerky" is sometimes eaten like candy.

Kitchens in old New Mexico houses sometimes get remodeled, but there is one feature which is usually left undisturbed: the ristra hook in the kitchen ceiling. While ristras are often used as decorative symbols of New Mexico hospitality, hanging by front doors until they weather and fall apart, traditionally ristras once dried were stored in a loft or shed and brought into the home one at a time to be hung in the corner of the kitchen and plucked from as needed. (If you are buying a ristra for cooking, be sure to inquire if it has been sprayed in any way -- sometimes coatings are applied to decorative ristras to increase shine or add color.) Tin cones or discs were sometimes used on the strings of the hanging ristras to discourage rodents from creeping down the string -- New Mexico mice like chile too, especially the seeds!