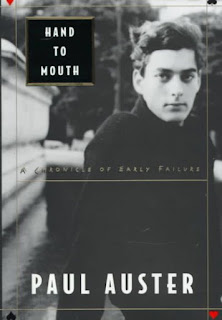 Paul Auster was a novelist in Brooklyn before there were novelists in Brooklyn. (When I was growing up there in the 1980s, my father used to point him out to me as we did the grocery shopping in Park Slope — this was a rare kind of sighting.) Since those days much has changed; you can’t go out to the Fort Greene Greenmarket on Saturday without running into a spangle of fiction writers. But Auster’s fictional concerns — the contingency of identity, the nihilism of urban living, the clarities of asceticism — have remained steadfast, even as the postmodern toolbox has grown more elaborate, demanding greater semantic complexity of its users than ever before.
~Meghan O'Rourke, "These Wild Solitudes"

Paul Auster was born in 1947 in Newark, New Jersey. His first book was a critically acclaimed memoir called The Invention of Solitude, published in 1982 after his graduation from Columbia University and his move to Paris, where he tried to become a poet. His books defy categories - his acclaimed series of loosely connected stories, The New York Trilogy (winner of the Prix France Culture de Littérature Étrangère in 1989), are billed as detective stories, but not traditional ones, as they feature an existential bent - they once described as "Kafka goes gumshoe". His themes include American history, absence of father, loss of language, coincidence, intertextuality, and an obsessive writer as a character. He has credited his start in writing to failing, at age 7, to get an autograph from baseball great Willie Mays because he didn't have a pen to hand.

Paul Auster has also been a finalist for the PEN/Faulkner Award for Fiction and on the IMPAC Award longlist multiple times. He was part of NPR's National Story Project from 1999-2001, and has written the screenplay for the movie Smoke, and directed the movie The Inner Life of Martin Frost, among other cinematic accomplishments. Auster has also translated works by French writers. Personally, he was married to writer Lydia Davis and is now married to writer Siri Hustvedt, with whom he lives in Brooklyn.


Travels in the Scriptorium [LP, audiobook]

Man in the Dark

The Book of Illusions

In the Country of Last Things


The Invention of Solitude


City of Glass [adaptation by Paul Karasik and David Mazzucchelli}


Report from the Interior


Hand to Mouth: A Chronicle of Early Failure