New and Novel from The New Yorker 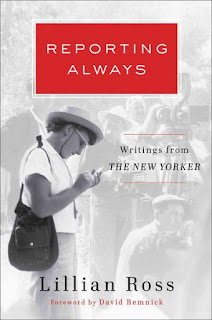 We are fascinated by the New Yorker magazine and its writers - so many famous wordsmiths have written articles and stories for the periodical since its first issue published in 1925. Even in the beginning, it was linked to the famous literary lights of the Algonquin Round Table, which counted magazine editor Harold Ross, critic Alexander Woollcott, and contributor Dorothy Parker amongst its members.

Though the magazine has more features by male authors ([i]n 2013, women still made up less than a third of the magazine’s bylines, according to the annual count by VIDA), we are most fascinated by the female writers who have contributed to is fame - to name but a few, Maeve Brennan, "the Long-Winded Lady" in the magazine's "Talk of the Town" section; Lois Long, a flapper who wrote about the nightlife under the pen name "Lipstick" and who was recently featured in the book Flapper: A Madcap Story of Sex, Style, Celebrity, and the Women Who Made America Modern; and Janet Flanner, the New Yorker's Paris correspondent, whose columns were signed "Genêt".

And those are only the writers! There are many books available about the cartoons from the New Yorker. Charles Addams' kooky and ooky Addams Family got their start in the pages of the magazine; James Thurber both drew cartoons and wrote short stories; more recently, the magazine has hosted the work of  Jules Feiffer and Roz Chast, among others.

Reporting Always: Writings from The New Yorker by Lillian Ross


Cast of Characters: Wolcott Gibbs, E. B. White, James Thurber, and the Golden Age of the New Yorker by Thomas Vinciguerra

The 50s: The Story of a Decade by The New Yorker Magazine [eBook only]

Man in Profile: Joseph Mitchell of the New Yorker by Thomas Kunkel

How About Never - Is Never Good for You?: My Life in Cartoons by Bob Mankoff [eBook also]


I Only Read It for the Cartoons: The New Yorker's Most Brilliantly Twisted Artists by Richard Gehr

Like reading from magazine anthologies? Check out one of our older posts here for more suggestions!