FSA Photography, The Works Progress Administration, and the New Deal 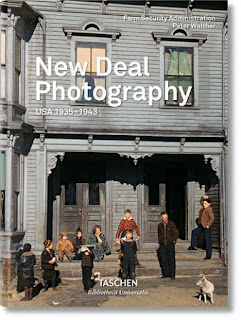 Contrary to popular association, photography was not the primary work of the Farm Security Administration. The FSA was a New Deal agency designed to combat rural poverty during a period when the agricultural climate and national economy were causing great dislocations in rural life. The photographers who worked under the name of the FSA were hired on for public relations; they were supposed to provide visual evidence that there was need, and that the FSA programs were meeting that need. Beyond serving this institutional image, the photographers were to document aspects of "the American way of life" that caught their eye. This looser and farther-reaching mission ultimately accounted for the vast file of photographs (over 80,000 black and white images) that is now considered one of the most famous documentary photography projects ever.
~Juliet Gorman

We have long had an interest in the Great Depression and the New Deal - perhaps early exposure to the musical Annie is to blame, or we got too caught up in the drama of 1999's Cradle Will Rock, or we saw Dorothea Lange's "Migrant Mother" photograph at an impressionable age. But when New Deal Photography: USA 1935-1943  rolled across our desk one day, we thought now might be a good time to delve deeper into this topic!

Recently we were at Roosevelt Park in southeast Albuquerque and noted its sign: 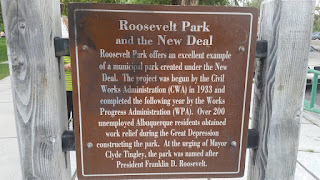 We had never before considered how the New Deal had touched New Mexico - in fact, had touched all the states, if the amount of  WPA state guides in the library catalog are anything to go on. But what was it, exactly? We had always thought of the Works Progress Administration (sometimes called the Works Project Administration) in terms of the murals, posters, and the photography. But  that was just the tip of the iceberg, we discovered.

The WPA was created in 1935 as a work project for the unemployed. There were 11 million unemployed in 1934 and the WPA put 8 million of them to work, constructing roads, creating parks, building public buildings, bridges, and airports, and, as the Federal Arts Project, Federal Writers' Project, and Federal Theater Project, entertaining. There was even an arm of the WPA responsible for finding part-time jobs for youth. Critics of the program called it " a device for creating a huge patronage army loyal to the Democratic Party," and that the work it created was unnecessary; Harry Hopkins, one of FDR's advisers, believed  “giv[ing] a man a [handout]… you save his body and destroy his spirit. [But by giving] him a job… you save both body and spirit.” The WPA only endured 8 years, ending in 1943 with some charges of mismanagement and with the employment boom of the wartime years.

For more about the WPA, the Farm Security Administration (also created in 1935, to fight rural poverty - many famous Depression-era photographers got their start in this branch of the New Deal), and how they affected New Mexico, consider checking out one of the items from the library catalog listed below.

Bound For Glory: America in Color, 1939-43  introduction by Paul Hendrickson

Dorothea Lange: A Life Beyond Limits by Linda Gordon

The Food of a Younger Land: A Portrait of American Food - Before the National Highway System, Before Chain Restaurants, and Before Frozen Food, When the Nation's Food Was Seasonal, Regional, and Traditional - From the Lost WPA Files edited and illustrated by Mark Kurlansky

America Eats!: On the Road With the WPA - The Fish Fries, Box Supper Socials, and Chitlin Feasts That Define Real American Food by Pat Willard

Public Art and Architecture in New Mexico 1933-1943: A Guide to the New Deal Legacy compiled by Kathryn A. Flynn


Believing Is Seeing: Observations on the Mysteries of Photography by Errol Morris

On the Ropes by James Vance and Dan E. Burr

The Muralist: A Novel by B. A. Shapiro

The New Deal: A Modern History by Michael Hiltzik

America 1933: The Great Depression, Lorena Hickok, Eleanor Roosevelt, and the Shaping of the New Deal by Michael Golay

Fear Itself: The New Deal and the Origins of Our Time by Ira Katznelson

A Square Meal: A Culinary History of the Great Depression by Jane Ziegelman and Andrew Coe