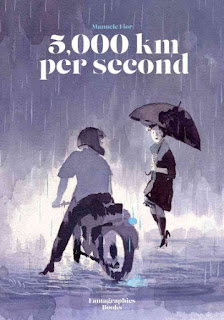 The year 2016 has been a wild one for the comics industry. Financially, there’s been a bit of panic: According to analyst John Jackson Miller, sales are down compared to this time last year across a wide array of indicators, from units sold to dollars made. But creatively, there’s cause for excitement. DC Comics, suffering under eternal rival Marvel’s market dominance, has launched an ambitious quasi-reboot called “Rebirth”; Marvel has followed 2015’s lucrative “Secret Wars” event with an array of intriguing new titles; and independent publishers are cranking out high-quality product across the board.
~Abraham Riesman, "The Best Comics of 2016 (So Far)"

It's 24-Hour Comics Day! "On this day, creative folks take on the 24 hour comics challenge: to create a 24 page comic book story, normally months worth of work, in 24 straight hours. Many participants gather at official event sites including comic book stores, schools, and libraries. Others take part in private gatherings, and many work on their own," the event website explains. In Albuquerque, you'll be able to join this frenzy of creation with our friends at 7000 B.C. at Twin Suns Comics and Games. The event runs noon-noon, and though they are not requiring registration they would appreciate an email if you decide to join - check out the 7000 B.C. website for more info, or there's downloadable information here. This event has been happening since 2004, according to the Weekly Alibi, which calls it a "DIY adventure":  "Bring your pencils, erasers, inks and paper and be ready to buckle down. Winning Coffee Co. will be on hand to provide fuel for participants."

In honor of this event - the first Saturday in October annually, if you can't make it this time - we've rounded up some recent comics that we have enjoyed or which have gotten some good buzz. Good luck, creators!

Was She Pretty? by Leanne Shapton

Everything Is Teeth by Evie Wyld


The Envelope Manufacturer by Chris Oliveros