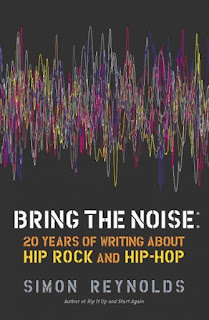 Simon Reynolds is a British music critic, based in the United States, who was once a senior editor at Spin magazine and whose articles have been featured in the Guardian and Pitchfork. Both his parents were journalists, so he "got the idea rather early on that nothing could be better than seeing your byline in print." The A.V. Club's Steven Hyden called Reynolds "[o]ne of the most respected music critics working today...an expert chronicler of trends and movements in post-punk and electronic music since the ’80s;" AJ Ramirez at PopMatters calls Reynolds' writing "analytical, articulate, and occasionally quite humorous." Simon Reynolds himself described his first book as "an argument about noise."

Reynolds has written a lot about cultural issues in his criticism (he has coined a term called "liminal class" - the "lower-middle class/upper-working class zone. That area is where a lot of music energy comes from") and his earliest writings dealt more in critical theory, with nods to Barthes, Bataille, Nietzche, Foucault, Kristeva. He has since moved on to "coming up with [his] own theories and trusting [his] own perceptions without necessarily looking for some authority to back it up."

A lot of interviews by Reynolds online came out at the time of his book Retromania in 2011. Some of our favorite Reynolds quotes are from his interview with The Quietus:

"I think it's better to have less [music] and really listen to it deeply. There's nothing better for me than getting stuck on a record I can't stop playing. It's a nice feeling, and it brings me back to a time when I had records in single figures, or, you know, 16 records and I'd play those records 20, 30, 40 times and knew them inside out."

"In a funny sort of way when I was buying records, collecting records in the past, I was aiming to reach this state of overload through my greed and the curiosity that I had, and just wanting to expand my horizons. But now anyone growing up into music is in the position that critics or whatever were in, in that they have this crazy abundance of music at their fingertips. So that's why I'm interested in these people who are trying to navigate that."


Simon Reynolds is also featured in the film Punk Revolution NYC  "representing the British view."  He also has a number of blogs - the main one is blissblog.

If you are looking for informed, diverse, encyclopedic opinions about music, look no further than the writings of Simon Reynolds.

Bring the Noise: 20 Years of Writing About Hip Rock and Hip Hop [eBook]

Retromania: Pop Culture's Addiction To Its Own Past

Shock and Awe: Glam Rock and Its Legacy From the Seventies to the Twenty-First Century