Have a Hygge New Year 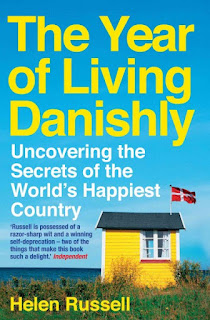 Winter is the most hygge time of year. It is candles, nubby woolens, shearling slippers, woven textiles, pastries, blond wood, sheepskin rugs, lattes with milk-foam hearts, and a warm fireplace. Hygge can be used as a noun, adjective, verb, or compound noun, like hyggebukser, otherwise known as that shlubby pair of pants you would never wear in public but secretly treasure. Hygge can be found in a bakery and in the dry heat of a sauna in winter, surrounded by your naked neighbors. It’s wholesome and nourishing, like porridge; Danish doctors recommend “tea and hygge” as a cure for the common cold. It’s possible to hygge alone, wrapped in a flannel blanket with a cup of tea, but the true expression of hygge is joining with loved ones in a relaxed and intimate atmosphere.
~Anna Altman, "The Year of Hygge, The Danish Obsession With Getting Cozy"

Lately, it's been cool to be Scandinavian. The past couple of years, we've heard a lot of talk about Norway's "slow TV" sensation, in which shows feature someone knitting a sweater, a 7-hour train journey, an evening's discussion of firewood, and the like. We've been reading books by Scandinavians that are not "Nordic noir", like Karl-Ove Knausgaard's multi-volume My Struggle and the works of Per Petterson and Fredrik Backman. And it's not the first time Scandinavian culture has crossed the pond - we have them to thank for some modern furniture design and saunas, for instance. Now, the Danish word hygge (pronounced "HOO-gah") was on the shortlist for Oxford Dictionaries' Word of the Year 2016.

"Danish winters are long and dark, and so the Danes fight the darkness with their best weapon: hygge, and the millions of candles that go with it," explains the website Visit Denmark. "Hygge is a philosophy; a way of life that has helped Danes understand the importance of simplicity, time to unwind and slowing down the pace of life." Hygge is usually summed up in English as "cozy," but many would argue that there's more layers to it than that.Why the sudden fascination with hygge? Well, Denmark is usually at the top of the World Happiness Report (the USA is usually #13), and hygge is considered to be a contributing factor, though the concept certainly has its detractors.

According to many pundits, hygge will be to 2017 what "tidying up" was to 2015. Are you ready to get hygge with it this winter? We've created a list of items from the library catalog to introduce you to hygge and other interesting slices of Scandinavian culture (for the purposes of this post, we're considering Finland and Iceland as members of Scandinavia, which is debatable) and bring a little Scandinavian flavor into your life. How do you hygge? Let us know in the comments!

The Year of Living Danishly: Uncovering the Secrets of the World's Happiest Country by Helen Russell

The Danish Way of Parenting: What the Happiest People In the World Know About Raising Confident, Capable Kids by Jessica Joelle Alexander and Iben Sandahl [eBook]

The Almost Nearly Perfect People: Behind the Myth of the Scandinavian Utopia by Michael Booth

Viking Economics: How the Scandinavians Got It Right - And How We Can, Too by George Lakey

Welcome to the Goddamn Ice Cube: Chasing Fear and Finding Home In the Great White North by Blair Braverman

Tales From the Loop illustrations & texts by Simon Stålenhag

I Am Zlatan: My Story On and Off the Field by Zlatan Ibrahimović with David Lagercrantz

Names For the Sea: Strangers in Iceland by Sarah Moss


The Nordic Theory of Everything: In Search of a Better Life by Anu Partanen

Finnish Lessons: What Can the World Learn From Educational Change in Finland? by Pasi Sahlberg

The Book of Hope by by Tommi Musturi ; translated by Pauliina Haasjoki

Fika: The Art of the Swedish Coffee Break, With Recipes For Pastries, Breads, and Other Treats by Anna Brones & Johanna Kindvall

The Kinfolk Home: Interiors For Slow Living by Nathan Williams


Rough Guide to the Music of Scandinavia

Comet in Moominland by Tove Jansson