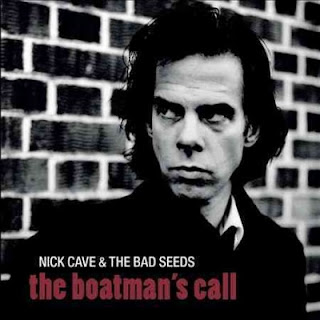 We'd like to put forth the claim that Australian musician Nick Cave is a polymath (he's been called "the renaissance man of the “postpunk” generation"); if not that, you have to admit, he's one of the harder-working men in show biz. He writes and plays music (with more than one band - 16 albums with the Bad Seeds, movie soundtracks with Warren Ellis, and is part of Grinderman), writes novels and screenplays, and has acted (as himself, sort of) in movies. "Commited Cave divers" (his fans have some wacky names) will not be disappointed by his prodigious output.

Cave's work is not for everyone - he's been called "too dark, too alternately demonic or densely romantic; too literate, strange and grandiose" as he writes about some of his favorite themes, "[l]ove, violence, death and America." We ourselves are latecomers to his oeuvre - he started out in The Boys Next Door in 1977 (later to morph into the Birthday Party in 1980), and started up the Bad Seeds in 1984 - but, apart from brief exposure to the song "Into My Arms" in the 1990s when Cave was dating PJ Harvey, we have to confess our interest was piqued first by the film 20,000 Days On Earth. Here's one of our favorite quotes from the film:

All of our days are numbered. We can not afford to be idle. To act on a bad idea is better than to not act at all because the worth of the idea never becomes apparent until you do it. Sometimes this idea can be the smallest thing in the world; a little flame that you hunch over and cup with your hand and pray will not be extinguished by all the storm that howls about it. If you can hold on to that flame, great things can be constructed around it; things that are massive and powerful and world changing. All held up by the tiniest of ideas.


The library catalog has a good sampling of Nick Cave's work, if you choose to give it a try. Whatever you do, don't miss "End Crawl" on the Lawless soundtrack! A lovely piece of instrumental music.

Push The Sky Away

The Death of Bunny Munro

cameo (with the Bad Seeds) in Wings of Desire

one song, "Sweet Rosyanne," with Dan Zanes on Catch That Train!


Nick Cave is also participating in the "grown-up children's tales" charity book Stories for Ways and Means, and you can listen to The Wire's Andre Royo perform Cave's story "The Lonely Giant" online.