Remembrance of Literary Hoaxes Past 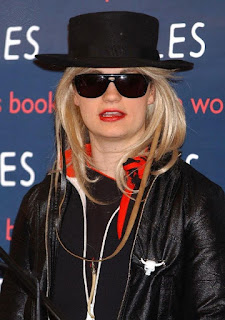 The documentary, Author: The JT Leroy Story, written, directed and produced by Jeff Feuerzeig, revisits a decade-long literary hoax perpetrated by writer Laura Albert. Albert, who has avoided the media, is the focus of the documentary, giving her a generous opportunity to share the story of her life and the evolution of her literary avatar: Jeremiah Terminator (J.T.) Leroy.

J.T. Leroy was a blond, blue-eyed, transsexual hustler HIV-positive boy, who was addicted to heroin and hailed from West Virginia. He was the son of an abusive teenage mother who worked as a truck stop prostitute or "lot lizard". J.T. Leroy embarked on a Kerouac-ian On the Road odyssey with his monstrous mother, only to be abandoned in San Francisco among the other discarded gay, lesbian, bisexual, and transgendered (GLBTQ) runaways with substance abuse problems who relied on prostitution and homeless shelters to survive.

J.T. first surfaced through a suicide hotline in the 1990's. He was treated by psychologist Dr. Terrence Owens through phone calls, but never in person. Dr. Owens encouraged his transient patient to write his life story in order to heal from abuse and trauma. J.T. claimed that because he wanted to write more than he wanted heroin, he was able to kick his addiction. Despite a complete lack of education, J.T. produced novels in the Southern Gothic tradition that were lyrically entrancing and violently salacious. J.T. reached out to his literary heroes: Sharon Olds, Mary Karr, Brucer Benderson, Joel Rose, Laurie Stone, and  Dennis Cooper. Publishers were eager to give him book deals and publicity that most writers spend lifetimes to acquire. Hollywood followed suit with movie offers.  J.T. Leroy's novels The Heart Is Deceitful Above All Things, Sarah and Harold's End became bestsellers that were translated into over twenty languages.

Celebrities adored J.T. and agreed to read his books at readings since he was too emotionally fragile and would only rarely appear in public concealed behind Andy Warholian wigs, massive sunglasses, and elaborate costumes. J.T. spoke in feminine whispers with an unconvincing Southern accent. His lack of Adam's apple was explained by his being a preoperative transsexual on massive amounts of hormones whose growth was stunted by horrific abuse. J.T. was always accompanied by his grating British publicist Speedy and her musician husband Astor, his adoptive family who had formed a band they called Thistle, which opened every reading event.

Leroy branched out into publishing articles and posing for fashionable magazines. His imminent death due to HIV was no longer spoken of, and inconsistencies regarding his upcoming gender reassignment surgery also baffled supporters. Writers and journalists connected to the San Francisco arts and the literary community began to compare notes and tallied their doubts and concerns. Journalist and writer Stephen Beachy wrote an outstanding article for New York Magazine that dared to ask the question, Who Is J.T. Leroy?

New York Times journalist Warren St. John was also following his own leads and produced an article:  The Unmasking of J.T. Leroy: In Public, He's a She. J.T. Leroy was revealed to be Laura Albert's partner musician Geoffrey Knoop's half-sister Savannah Knoop, an aspiring clothing designer. Laura Albert never apologized to anyone then, and continues to not acknowledge that she harmed or deceived anyone. Albert insists that her avatar J.T. Leroy merely surfaced and did everything for her creatively, that she was unable to do for herself.

Laura Albert's confessions in Author reveal her insecurities and mental illness which was compounded by an abusive childhood and time spent in a group home, where she developed a habit of calling crisis hotlines. Albert attended the New School in New York, but was discouraged by her professor to write in a male voice. Albert's education was disrupted by another nervous breakdown and she abandoned writing. For several years, she worked as a phone sex operator, had a child with her partner Geoff Knoop, and underwent a gastric bypass surgery after a lifetime of compulsive overeating left her at 325 pounds.

Albert denies that she has multiple personality disorder, but the emergence of J.T. Leroy produced what Albert called a "psychic limb" that propelled her back into the literary world and fulfilled her wish to be a blond, blue-eyed boy that gay men would desire and love. Albert's protestations that she was merely using a pen name ring false, especially since J.T. Leroy and his entourage traveled the world and signed lucrative contracts under false pretenses, sheltered by a fake corporation put in Laura Albert's mother's name. Albert was sued by a movie company for $350,000.The chaos left in Albert's wake prompted debates over the literary merits of her novels.  Whether Albert would have been published without her avatar J.T. Leroy, who titillated the publishing industry and tugged at the heart strings of his supporter and readers is doubtful.

Author is a fascinating documentary that also gives the viewers moments of schadenfreude in witnessing self-indulgent celebrities gush over an imposter, especially through the phone calls Albert illegally taped, including Courtney Love, Gus Van Sant,, and Asia Argento.  Author is one-sided and fails to account for the emotional devastation experienced by ordinary people who considered themselves to be friends of J.T. Leroy. Many friends were subjected to Laura Albert's terrifying dissociative episodes and suicide threats and found themselves emotionally drained by the experience. The Cult of J.T. Leroy by Marjorie Strum tells their stories much more sympathetically.  I made a staff suggestion for the library to acquire Strum's superior documentary, which includes the deposition of Dr. Terrance Owens, who appears to be the most compassionate and thoughtful psychologist on the planet. Dr. Owens is still working with homeless runaways and Laura Albert continues to be his patient, even after her fraud came to light.

An interview with Ira Silverberg, Leroy's former agent discussed the predatory cultural appropriation of a straight, middle-class woman impersonating a HIV positive, marginalized transsexual during a period in the 1990's when a generation of gay artists and writers perished. Albert's hoax preyed on a community that was receptive to helping anyone struggling with AIDS, especially since sufferers were frequently abandoned by their families and the disease at that time was in and of itself, an automatic death sentence, before the advent of the AIDS cocktail and scientific breakthroughs that increased the chances of survival.

One of the fatal flaws in Albert's scheme was having J.T. Leroy be HIV positive. Albert was lazy when she decided to use the blueprint of another woman named  Joanne Victoria Fraginals, a middle-aged woman who claimed to be a social worker who had saved and adopted a young AIDS-stricken, sexually abused boy named Anthony Godby Johnson, who had escaped a ravenous pedophile ring lead by his parents in New York City. The fourteen-year-old "Tony" released a treacly memoir entitled "Between a Rock and a Hard Place" that went through six printings and had a forward by poet, AIDS activist, and author Paul Monette and an afterward by the beloved Mister Fred Rogers. In the midst of this hoax, acclaimed novelist Armistead Maupin, who is famous for his Tales of the City series,  was befriended by Tony over the phone. However, no one had ever met Tony in person. Newsweek journalist Michele Ingrassia started to ask simple questions about Tony and also attempted to locate Tony's felonious parents, but the district attorney had no record of ever trying such a notorious case. The pathetic hoax quickly collapsed despite Fraginals strenuous efforts to keep the hoax going and Armistead Maupin channeled his experience into his extraordinary novel The Night Listener which was turned into a less than spectacular movie, but one that delivers on the hair-raising creepy suspense of dealing with the unraveling of a fraud's mental and imaginary construct.

The Oxford Book of Parodies edited by John Gross

The Family Romance of the Impostor-Poet Thomas Chatterton by Louise J. Kaplan

Geronimo's Bones: A Memoir of My Brother and Me by Nasdijj.

The Man In the Rockefeller Suit: The Astonishing Rise and Spectacular Fall of a Serial Imposter by Mark Seal

The Hoax by Clifford Irving

A Treasury of Great American Scandals: Tantalizing True Tales of Historic Misbehavior By the Founding Fathers and Others Who Let Freedom Swing by Michael Farquhar

Hard News: The Scandals At the New York Times and Their Meaning for American Media by Seth Mnookin