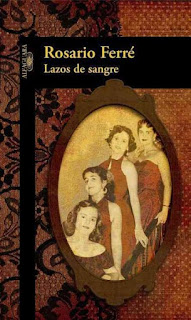 Rosario Ferré Ramírez de Arellano was a Puerto Rican writer and poet whose 1995 novel The House on the Lagoon was nominated for a National Book Award. Daughter of a pro-statehood governor, she started writing articles for the newspaper in her teens; after studying in the United States, she returned to Puerto Rico to get her master's degree and began writing prose in earnest, founding, editing and publishing an irreverent literary journal devoted to new writers supporting Puerto Rican independence. She went on to get a PhD in Latin American literature, studying with Mario Vargas Llosa.

Ferré's earliest writings in the '70s and '80s were in Spanish, but in the 1990s she started to translate her own work to English. She translated The House on the Lagoon and found


[i]n translation it doubled in size and changed so much that after it was published, she had to retranslate it back into Spanish. In English, Ms. Ferré said in the Times interview, she found that the patriarchal husband, Quintin Mendizabal, was “less unpleasant, nicer and more human,” whereas in Spanish, he was “a scoundrel who is not worthy of forgiveness.”

The L.A. Times had high praise for the book: "Like her Latin American counterparts, Ferré contemplates the possibilities of magic, yet like her northern counterparts, she remains firmly rooted in reality. 'The House on the Lagoon' is alternately curious and wise, ambivalent and forthright." Ferré tended to write about the lives of women with troubled minds, "often the victims of violent passions, bizarre fixations, and strange diseases," though they live otherwise unremarkable lives in provincial Puerto Rico.

Rosario Ferré died this past February of natural causes after leading a full life, including three marriages and three children; winning literary awards and a Guggenheim Fellowship, and being awarded an honorary doctorate from Brown University; teaching at several universities and being a contributing editor for Puerto Rico's English language newspaper.

The House on the Lagoon

Flight of the Swan