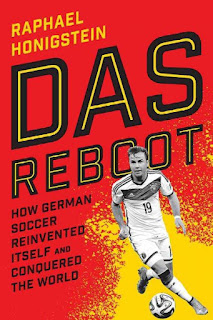 This has been a big soccer summer - last month saw the Copa America, and the European Championship (Euros) is still ongoing. There will also be soccer at the upcoming Summer Olympics. One of our favorite irreverent soccer blogs, Dirty Tackle, posted a video from the England soccer team's hotel and training base which featured a look at the team's well-stocked bookshelf in the "leisure room". If only the video featured shots of the players reading!

What is considered a tempting read for the average soccer player? Well, Dirty Tackle compiled a list of the seemingly "hand-picked" titles on display. Here is a list of books from the team's training base which are in our library catalog:

The Autobiography of Malcolm X

Richard Branson’s Losing My Virginity: How I Survived, Had Fun, and Made a Fortune Doing Business My Way

Zlatan Ibrahimović's I am Zlatan: My Story On and Off the Field

Do you think many of these got read by the players? Would you be interested in reading a book endorsed by your favorite athlete? Since our Summer Reading theme (going strong until July 16th!) is Get in the Game: Read, we've compiled a list of other recent titles from the library catalog sports fans might enjoy:

Why Soccer Matters by Pelé

Soccer Men: Profiles of the Rogues, Geniuses, and Neurotics Who Dominate the World's Most Popular Sport by Simon Kuper


More Than a Team: A Father, a Son, and Barça by Vicenç Villatoro [eBook]

This Love is Not For Cowards: Salvation and Soccer in Ciudad Juárez by Robert Andrew Powell [eBook]

Futebol Nation: The Story of Brazil Through Soccer by David Goldblatt [eBook]

Find a Way by Diana Nyad

A Different Kind of Daughter: The Girl Who Hid From the Taliban in Plain Sight by Maria Toorpakai with Katharine Holstein

Speed Kings: The 1932 Winter Olympics and the Fastest Men in the World by Andy Bull

Badger: The Life of Bernard Hinault and the Legacy of French Cycling by William Fotheringham

Das Reboot: How German Soccer Reinvented Itself and Conquered the World by Raphael Honigstein


Ping Pong Diplomacy: The Secret History Behind the Game That Changed the World by Nicholas Griffin

The Jewish Olympics: The History of the Maccabiah Games by Ron Kaplan

The Three Year Swim Club: The Untold Story of Maui's Sugar Ditch Kids and Their Quest for Olympic Glory by Julie Checkoway

This is Your Brain on Sports: The Science of Underdogs, the Value of Rivalry, and What We Can Learn From the T-shirt Cannon by L. Jon Wertheim and Sam Sommers

Dancing with the Devil in the City of God: Rio de Janeiro On the Brink by Juliana Barbassa