The Secret Lives of Housewives 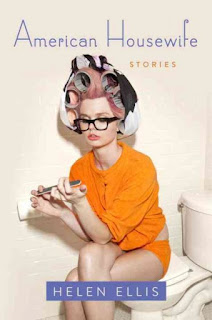 It’s a wonder that anyone has the nerve to write about housewives at all anymore: Not only are these women bored, but they have been universally declared boring. Yet last year saw the publication of Hausfrau, an acclaimed novel by the poet Jill Alexander Essbaum about a disconsolate American woman languishing in her husband’s stifling hometown in Switzerland, and this month brings American Housewife, a short story collection by Helen Ellis. Add to that Jenny Offill’s Department of Speculation, a 2014 novel that, while not technically about a housewife, wrestles with the same conflict between family life and self-determination, and it’s clear that the theme is enjoying a minirevival of sorts.
~Laura Miller, "Ladies of Leisure"

Novels featuring housewives as protagonists first burst on the scene in the 1960s-70s, with memorable opuses including Susan Isaacs' Compromising Positions, Judy Blume's Wifey and Erica Jong's Fear of Flying, the latter two first novels for both authors (in Blume's case, her first novel for adult readers). Some of these early novels were sexy, some were polemics, but they definitely had a different take on the "suburban malaise" of earlier novels by their male counterparts featuring housewives, such as Revolutionary Road or Rabbit, Run. This was also the era that Erma Bombeck began publishing her "At Wit's End" columns, which took a humorous look at the lives of wives and mothers.

But, since them, we have had Desperate Housewives and Real Housewives of several different locales, and novels about lives in suburbia have become more twisted - or their secrets and controversies are more exposed, including vigilantes (Tom Perrotta's Little Children), familial doom (Jeffrey Eugenides' The Virgin Suicides), brutal murder (Alice Sebold's The Lovely Bones),  deception (Gillian Flynn's Gone Girl), and wife-swapping (Rick Moody's The Ice Storm).

We've compiled for you a list of fictional housewives with all sorts of adventures and dilemmas: in a "quirky ode to love, fate, and hair metal"*; trying to fit in in a seaside village with a soap-selling mafia; trapped in what looks like a picture-perfect marriage; after the end of marriage, trying to make ends meet in a dodgy apartment-sitting situation; dealing with family secrets coming to a head; meeting a celebrity crush who changes everything; even a 35-year friendship that becomes a writers' circle. Being a housewife is not a quiet or uncomplicated life! As Helen Ellis said on Twitter, in her housewife persona (her handle is WhatIDoAllDay, and she regards her feed as an online "cocktail party"), “I’m not bored, I’m lying in wait."

My Year of Meats by Ruth L. Ozeki

The Hummingbird's Cage by Tamara Dietrich

The Children's Crusade by Ann Packer

The Obituary Writer by Ann Hood

How To Be an American Housewife by Margaret Dilloway

The Actor and the Housewife by Shannon Hale [eAudiobook]

The Atomic Weight of Love by Elizabeth J. Church

The Longest Night by Andria Williams

*from the library catalog