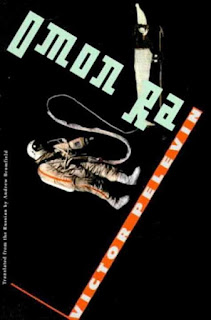 For two decades now, his work has been a beacon of light on the cultural life of a country whose history is difficult and whose socio-economic situation is far from ideal.  Creating the myths and legends of the new Russia, Pelevin mixes the Strugatsky brothers with Stanislav Lem and marinates them in Jorge Luis Borges. This turns out to be a winning combination for works of the fantastical satirical genre, books that are deep, poisonous, funny and endlessly inventive, revealing, explaining and commentating on the reality we read about in the newspapers.
~Alexander Genis, "At 50, Victor Pelevin creates myths for the new Russia"

Victor Olegovich Pelevin is a Russian fiction writer, not widely known in the West, whose works have won the Russian "Little Booker" Award, among other honors, and whose first novel Omon Ra was noted as one of the best books of 1996 by Newsday and Spin. He studied engineering before he came to writing. Pelevin has been described as "a laconic, shaven-headed semi-recluse with a fashionable interest in Zen meditation and an attachment to dark glasses" by at least one interviewer. Buddhism, he says, helps him escape "all the junk of modern living" - he does not describe himself as a Buddhist, but he has traveled to South Korea to study with monks.

His books have been so popular in Russia that they get traded at nightclubs, but despite his wide fanbase he has also been polarizing - some Russians call him "a fraud." It's been said that his books "are based on a single philosophical principle: according to this, our world is just a series of artificial constructions, in which we humans are doomed to forever wander around blindly, searching in vain for the ‘real’ reality" and that he is "Russia’s answer to Thomas Pynchon, crossed with Kurt Vonnegut." He lists as his influences Mikhail Bulgakov, Franz Kafka, Herman Hesse, and Robert M. Pirsig.

The Sacred Book of the Werewolf

The Life of Insects

Blurring the Real and the Fantastic: Victor Pelevin's The Blue Lantern and Other Stories [World Literature Today]