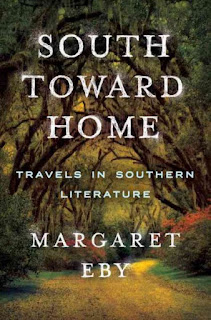 The American South has long been seen as the focus of the country’s Civil Rights Movement, carrying with it the stigma of poverty, racism, and anti-intellectualism. Yet the region has also produced a disproportionate number of intellectuals, poets, and writers, possibly because of the complicated and layered identities each Southerner holds within him- or herself. The South has begotten some of our nation’s most important authors, including prize winners like William Styron, Eudora Welty, Flannery O’Connor, Ralph Ellison, Harper Lee, and that titan of American letters, William Faulkner...a reminder that the South cannot be defined solely by its failings; it is also responsible for shaping the minds of countless thinkers who offered to American literature essential insights about not only their region but the world at large.
~Tyler Coates, The 50 Best Southern Novels Ever Written

Southern literature has certainly had its ups and downs, or popularity followed by backlash. Just since the last century, it had its only Nobel Prize for Literature winner, William Faulkner in 1949.  What might be called the heyday of Southern Gothic began in the 1930s and stretched to the 1990s, featuring some of the most famous names in American literature. There has been a swell of interest surrounding writing about the South almost once a decade, from Gone With the Wind to All the King's Men to A Streetcar Named Desire to In the Heat of the Night to Deliverance to Fried Green Tomatoes, and, most recently, The Help, as the publication as a book turns to the drama of making the movie - and the downside is usually issues about the world portrayed within. Just last year, The New York Post declared "'Gone With the Wind' should go the way of the Confederate flag"; The Help ignited similar controversy. Beloved author Harper Lee's long-awaited second book, Go Set a Watchman, with its more difficult portrayal of the upstanding Atticus, was said to have "diminished" her legacy. The September 2016 issue of Vanity Fair features an article called "The Literary Battle for Nat Turner's Legacy", a thoughtful and piercing history of William Styron's The Confessions of Nat Turner - published to much lavish praise for its portrayal of the title character in 1967, but no longer a staple of syllabuses and roundly dismissed by many African-American activists. Even in 1968, Styron was called upon to debate his book with actor and activist Ossie Davis, in a debate moderated by no less than James Baldwin. One of the issues with Styron's "form-bending" opus that had already come to light was this one:


Styron had miscalculated. His "common history" was narrower than he knew. He'd had superb historical advisers such as C. Vann Woodward, the great Yale historian of the South, and Robert Penn Warren, who had recently published a powerful book, Who Speaks For the Negro?, based on searching interviews with civil-rights leaders. But Styron has overlooked another part of the story that was familiar in the African-American world; Nat Turner's standing as a mythic figure, celebrated "in pageants during Negro History Week...a magnificent forefather enshrined in the National Pantheon beside the greatest heroes of the Republic..."

Many Southern writers have "come under attack for being politically tone-deaf," but as, Sam Tanenhaus asserts in his Vanity Fair article, "...The Confessions of Nat Turner may be Styron's most significant work, having accomplished the rare feat of meeting a traumatic moment with a story powerful enough to create a culture war."

Some of us at abcreads have family from the Southern states, and have enjoyed reading books set in the region, most recently Lee Smith's memoir, Dimestore: A Writer's Life. We like the way she sums up Southern culture:


Some things never change. Some Southern food will never go out of style, no matter how much it may get nouveau'ed. And large parts of the South still look a lot like they used to - the Appalachian coal country where I'm from, for instance, and the old Cotton Belt. A layer of cultural conservatism still covers Dixie like the dew. As a whole, we Southerners are still religious, and we are still violent. We'll bring you a casserole, but we'll kill you, too.

We hope to capture some of the best in Southern literature, redolent of both casseroles and death, with this list of recommended Southern reads mostly taken from "The Crowded Canon of the South" by Hal Espen, as featured in The Southerner's Handbook: A Guide to Living the Good Life by David DiBenedetto and the editors of Garden & Gun - a delightful compendium of Southern manners, slang, hobbies, and more. These books can be "like bellying up to a twenty-four-hour all-you-care-to-eat-buffet overflowing with decay, destruction, exploitation..." and more, so read at your own risk!


Let Us Now Praise Famous Men; A Death in the Family, & Shorter Fiction by James Agee

The Awakening by Kate Chopin

The Moviegoer by Walker Percy

Look Homeward, Angel: The Story of a Buried Life by Thomas Wolfe

Other Voices, Other Rooms by Truman Capote

A Long and Happy Life by Reynolds Price

Those Bones Are Not My Child By Toni Cade Bambara [eBook]

The Heart is a Lonely Hunter by Carson McCullers

A Confederacy of Dunces by John Kennedy Toole

The Interrogative Mood: A Novel? by Padgett Powell

Father and Son by Larry Brown

The Color Purple by Alice Walker

Big Fish: A Novel of Mythic Proportions by Daniel Wallace

Bastard Out of Carolina by Dorothy Allison

A Lesson Before Dying by Ernest J. Gaines

Dogs of God by Pinckney Benedict

The Ballad of Frankie Silver by Sharyn McCrumb [eAudiobook]

The Prince of Tides by Pat Conroy

Salvage the Bones by Jesmyn Ward

Their Eyes Were Watching God By Zora Neale Hurston

For more about Southern literature, check out South Toward Home: Travels in Southern Literature by Margaret Eby, or try a search of Southern States - Fiction. For more on Southern culture - especially food, because in our opinion that's another great way to soak up a regional way of life - try also The Southerner's Cookbook: Classic Recipes to Feed the Soul, by the same authors, Eat Drink Delta: A Hungry Traveler's Journey Through the Soul of the South, or try a subject search of Southern States -- Social life and customs.

The wonderful, terrible Gone with the Wind [A.V. Club]

Finding humanity in Gone with the Wind [Atlantic]