The Louvre Collection: Setting Comics Creators Loose in the Louvre 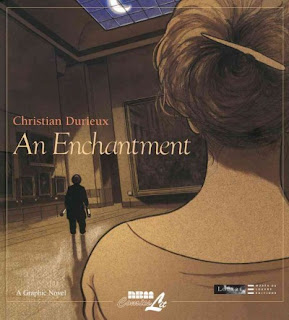 Setting comics creators loose in the Louvre, and then letting a story come to them that is inspired by the works they come across. One of the premiere cultural institutions in the WORLD decided that it would be a great idea to create a "lasting bridge" between their artworks and the world of comics-and their readers. That's just huge.
~Comixology

The Louvre Collection (or Louvre Éditions) is a series of graphic novels that have been published as a collaboration with the museum and some renowned  artists via the NBM ComicsLit imprint. The Seattle Post calls the series "an art and comics lover's treat". Each author has been given free rein to create their own story set amongst the museum's collections, and the results have been, in the words of the San Francisco Book Review, "curious and unexpected". If you are unfamiliar with the artists, check out their work online: Nicolas De Crécy studied Comic Art and the Angoulême School of Fine Arts, and later worked for Disney in France; Enki Bilal is not only a comic creator but also a film director; Christian Durieux does not appear to have standalone website, but he was born in "the European capital of comics, Brussels" and has been widely published in Spirou, a weekly comics magazine; and examples of  David Prudhomme's work can be found in a feature about the New York Comics & Picture-Story Symposium done by The Rumpus.

The library system has several of these graphic novels available in the catalog! Why not give one of them a try? Some give an interesting take into the exhibits and will surely fascinate those who have been to the Louvre as well as those who have not, but want to; others are more abstract, and will entertain readers with their flights of fancy.


An Enchantment: The Louvre Collection by Christian Durieux
"Beautifully constructed in a semi-classical style, this graphic novel features a light-spirited romantic story. This latest installment in the Louvre collection tells the tale of a museum director in a waking dream after his retirement dinner where he wanders the vast halls of the museum before eloping with a muse. The magic of the vast museum melds with the ethereal storytelling to create a unique graphic novel that stands as an unforgettable experience." ~Amazon.com


Glacial Period by Nicolas De Crecy
"In this fanciful and richly imaginative story, one of the most original and important young European comic artists imagines a frozen world thousands of years hence in which all human history has been forgotten. A small group of archaeologists come upon the Louvre, buried in age-old snow, and cannot begin to explain all of the artifacts they see. Their interpretations of the wonders before them strike a humorous, absurd, and farcical tone. One of the few books coedited by the Louvre, this graphic novel features stunning illustrations as it presents a unique vision of the great museum."


Phantoms of the Louvre by Enki Bilal
"Superstar comic artist Enki Bilal reimagines the Louvre as a ghostly place in this series of 22 portraits. The Mona Lisa , the Winged Victory of Samothrace , a reclining Christ, an Egyptian bust--these and other works of art are seen through the eyes of their own particular phantom. The motley collection of men, women, and children presented in these vignettes-- a Roman legionary, a muse, a painter, and a German officer, among others--have little in common other than their often violent demises and an eternity spent haunting the iconic Parisian museum. Bilal recounts the life stories of these lost souls in dramatic biographies that combine fiction and historical reality, often evoking the creation of the works in question. The paintings that compose this graphic novel were presented in a special exhibition at the Louvre in early 2013."


Cruising Through the Louvre by David Prudhomme
"Author David Prudhomme meanders through the Louvre, feeling as if in the panels of a giant comic while he himself is creating his own. In this institution, all manner of people from all over the world rub elbows quietly. So he decides to cruise through the Louvre at a quick pace, not to look at the art but to observe the people and their interaction with it. He discovers: a group of students somehow stuck together just as in the shipwrecked on the Raft of the Medusa; a man behind the Seated Scribe, as if attempting to read over his shoulder; in the hall of antiquities, a woman placing her head in a lions mouth... For two hours, Prudhomme is witness to a strange silent and casual choreography, danced in the midst of one of the most prestigious museums in the world..."

*All descriptions are taken from the catalog unless otherwise noted.