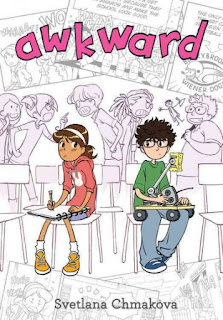 While many people think of graphic novels as "just comic books", the truth is that a good graphic novel doesn't simplify a story: instead, it amplifies it, drawing out details and adding emotional weight. For young or reluctant readers, in particular, a graphic novel format makes it easier to understand more complex stories. In fact, we'd argue that high-quality graphic novels are a key part of any library!
~Katherine Handcock, "Life in Pictures: Mighty Girl Graphic Novels for Young Readers About Real Life"

We've seen it time and time again - the child is looking at comic books, and the parent is trying to interest them in a "real" book or otherwise limit their consumption of that genre. It's true, comics can be inappropriate for the age group (check the ratings, T is for teen!) and there are a lot of superheroes and manga out there when you are looking to have your child read about real life. But! Françoise Mouly, art editor at the New Yorker, has been "dismayed to find not only a dearth of comics on American newsstands, but also a prevailing cultural attitude that comics were lowbrow filth, dangerous to children, and a fundamentally unserious medium,"  having grown up reading  Asterix and other comics in her native France, where comics are called "the ninth art, they stand alongside music and literature." Hannah Berry, blogging for The Book Trust, asserts:

Symbols and images can be interpreted from a very young age and are the bedrock of visual understanding before the written language, so it makes sense that they can be trusted. When you learn to read, you lose your reliance on image, and I've found that the longer it's been since a person read a picture book - ANY picture book - the harder they will find it to move some of that reliance from the text to the image. This is why people find the idea comics so childish: because it feels like regressing. In fact, it's just dusting off an old skill.


Some sites even recommend using comics as a tool to learn a foreign language. We understand that you want your child to read the classics and other literature, to not just limit their literacy to comics, but we also want you to know there are more comics out there in the 741.5s than might meet the eye. Here's a listing of some children's graphic novels - biographies, stories about overcoming diversity, and some just for fun - that you might suggest to your comic-loving child.

Hidden: A Child's Story of the Holocaust by Loïc Dauvillier

The Only Child by Guojing

Alia's Mission: Saving the Books of Iraq - Inspired By a True Story by Mark Alan Stamaty

Drawing From Memory by Allen Say

To Dance: A Ballerina's Graphic Novel by Siena Cherson Siegel

Pablo & Jane and the Hot Air Contraption by José Domingo


Sunny Side Up by Jennifer L. Holm & Matthew Holm

Jane, the Fox & Me by Fanny Britt

Annie Sullivan and the Trials of Helen Keller by Joseph Lambert

Phoebe and Her Unicorn: A Heavenly Nostrils Chronicle by Dana Simpson


Dare to Disappoint: Growing Up in Turkey by Ozge Samancı [eBook]


The Prison Island: A Graphic Memoir by Colleen Frakes  [eBook]