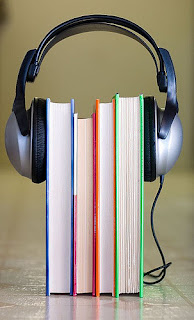 A narrator can make or break an audiobook. Tone, inflection, accents, ages, pronunciation, intensity – so many moving parts need to come together to form the perfect narration. A good narrator can bring the words to life and fire up your imagination, all while keeping you engaged and giving you a completely new and unique experience with your favorite book.
~Adam Sockel, "Great Audiobook Narrators"

Finding a good audiobook reader can be a challenge. One of the first ones we tried almost put us off for life: Don't Let's Go to the Dogs Tonight: An African Childhood, a favorite book, narrated by Lisette Lecat. Lisette Lecat is a highly recommended reader who also reads The No. 1 Ladies' Detective Agency series, but in reading Don't Let's Go to the Dogs Tonight, she attempted to mimic children's voices, and the result was creepy and annoying. We didn't listen to any audiobooks for a good while after that, sure we would only find heartache with bad readers.

In the fullness of time, though, working in a library surrounded by audiobooks and getting recommendations from customers frequently, we dipped our toe into the world of audiobooks again - we're here to tell you that nothing makes chores such as washing dishes go faster than audiobook accompaniment. We tend to be suckers for accents - Sushi for Beginners (Irish), Good Omens:The Nice and Accurate Prophecies of Agnes Nutter, Witch (British), and The Distant Echo (very thick Scottish accent, occasionally impenetrable but worth spending time deciphering for the quality of the reading) are three of our absolute favorites - and to dislike readings "by a full cast" (one voice is plenty, so long as they are not doing peculiar vocal tricks - sometimes listeners have issues with men mimicking women's voices, for instance), but really, you have to make those kinds of decisions for yourself. One person's dream reader can be another person's nails on a blackboard - we once complained of Anne Lamott's flat narration of her own work, only to have it vehemently defended.

Some audiobook readers are legendary: Jim Dale's Harry Potter audiobook renditions are beloved (though Stephen Fry reads Harry Potter across the pond, where his renditions are equally beloved) and Simon Prebble seems to get universal kudos, for instance. But sometimes you are looking for a particular thing from a reader - some people think you get more depth from authors narrating their own books (we think Neil Gaiman and Maya Angelou are tremendous readers). Or sometimes people are take umbrage with the gender of the narrator - though, apparently, "research suggests both men and women tend to trust male voices more." Actors are increasingly employed as voice talent, if you are looking for a reader with proven acting chops - Emilia Fox reads a lot of Agatha Christie, Kate Winslet reads Matilda, and Colin Firth lent his voice to The End of the Affair. And, of course, there's the continuing debate about "Does Listening Count as Reading?" - in our opinion, it most certainly does.

We have compiled a list of recommended audiobook narrators as suggested by Book Riot, with some additions of our own. Do you have any favorite narrators to add to the list? Any vocal tics by audiobook readers that drive you crazy? Let us know your take on audiobooks in the comments!

You've listed some great ones! I'd add Richard Armitage, who won the Audible book of the year (2014) for Hamlet: Prince of Denmark. His version of David Copperfield is amazing. Simon Jones is also fantastic in the Bartimaeus trilogy.