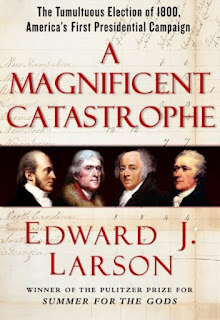 Concerned citizens and voters looking to better inform themselves on the structural mechanisms and personality dramas that define political campaigns may want to spend some time over the next couple of months away from the television and the blogosphere, and inside the pages of political campaign classics. They are books that, because of their depth of insight, quality of prose, and enduring relevance, offer an education far beyond what typically passes for analysis and commentary during the political Super Bowl.
~David Masciotra, "What 10 Books to Read for the Election Season: Cicero, Vidal, and More"

It's election season! Presidential candidates are on the campaign trail and the New Mexico primary election is coming soon. Here at abcreads we remain non-partisan in the face of relentless polling and trolling, but we have compiled a list of political reads pertinent to a presidential election year which might interest those who are politically savvy and might just teach the rest of us "something about the real-life business of political horse racing".* We're not sure all the books listed below qualify as "political campaign classics", but you can use "Campaign Tips from Cicero" to judge their merits for yourself!

Game Change: Obama and the Clintons, McCain and Palin, and the Race of a Lifetime by John Heilemann and Mark Halperin

1920: The Year of the Six Presidents by David Pietrusza

Fear and Loathing: On the Campaign Trail '72 by Hunter S. Thompson

The Outrageous Barriers to Democracy in America by John R. MacArthur

The Year of Indecision, 1946: A Tour Through the Crucible of Harry Truman's America by Kenneth Weisbrode

Fraud of the Century: Rutherford B. Hayes, Samuel Tilden, and the Stolen Election of 1876 by Roy Morris, Jr

The Fight to Vote by Michael Waldman

Adams vs. Jefferson: The Tumultuous Election of 1800 by John Ferling

Let the People Rule : Theodore Roosevelt and the Birth of the Presidential Primary by Geoffrey Cowan

Running From Office: Why Young Americans Are Turned Off to Politics by Jennifer L. Lawless and Richard L. Fox

1960 - LBJ vs. JFK vs. Nixon: The Epic Campaign That Forged Three Presidencies by David Pietrusza

Up, Simba!: 7 Days on the Trail of an Anticandidate by David Foster Wallace [eBook]

All the King's Men by Robert Penn Warren

Primary Colors: A Novel of Politics by Anonymous

The Innocent Have Nothing to Fear by Stuart Stevens


Our Lady of Greenwich Village by Dermot McEvoy

A Time to Run by Barbara Boxer with Mary-Rose Hayes

Political Books: What Campaign Novels Can Teach Us [HuffPost]*
Posted by abcreader at 7:00 PM