New and Novel: Women in Science 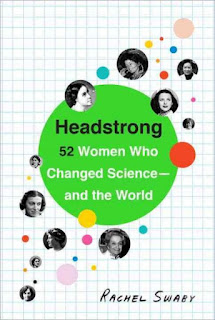 Last year saw the publication of The Only Woman in the Room: Why Science Is Still a Boys' Club. Author Eileen Pollack wanted to be an astrophysicist in the 1970s, but gave up her dream, despite being one of the first two women to earn a Bachelor of Science degree in physics at Yale, because she was unable to overcome the isolation, stereotyping, and gender discrimination the still faces women today who seek academic success in science and math. We hope this climate will change for women, with the White House espousing STEM for female students and events such as Sweden's Tekla Festival, where "girls between 11 and 18 years will get a chance to spend a full day discovering and experimenting with different kinds of technology...[offering] girls firsthand experience of the ways they can use technology, and a chance to meet female role models in a variety of fields."

If you are someone whose knowledge of women's contributions to science and math begins and ends with Marie Curie (we were!), why not check out one of these new titles and find out more about female achievements in these fields?

Lab Girl by Hope Jahren
An illuminating debut memoir of a woman in science; a moving portrait of a longtime friendship; and a stunningly fresh look at plants that will forever change how you see the natural world Acclaimed scientist Hope Jahren has built three laboratories in which shes studied trees, flowers, seeds, and soil. Her first book is a revelatory treatise on plant lifebut it is also so much more. Lab Girl is a book about work, love, and the mountains that can be moved when those two things come together. It is told through Jahrens remarkable stories: about her childhood in rural Minnesota with an uncompromising mother and a father who encouraged hours of play in his classrooms labs; about how she found a sanctuary in science, and learned to perform lab work done “with both the heart and the hands”; and about the inevitable disappointments, but also the triumphs and exhilarating discoveries, of scientific work

Rise of the Rocket Girls: The Women Who Propelled Us, from Missiles to the Moon to Mars by Nathalia Holt
The riveting true story of the women who launched America into space. In the 1940s and 50s, when the newly minted Jet Propulsion Laboratory needed quick-thinking mathematicians to calculate velocities and plot trajectories, they didn't turn to male graduates. Rather, they recruited an elite group of young women who, with only pencil, paper, and mathematical prowess, transformed rocket design, helped bring about the first American satellites, and made the exploration of the solar system possible. For the first time, Rise of the Rocket Girls tells the stories of these women--known as "human computers"--who broke the boundaries of both gender and science.

The Debs of Bletchley Park And Other Stories by Michael Smith
At the peak of Bletchley's success, a total of twelve thousand people worked there of whom nine thousand were women. Their roles ranged from some of the leading codebreakers, cracking German messages that others could not break, through the debutantes who chauffeured the codebreakers to and from work, to women like Baroness Trumpington who were employed as filing clerks, to the mass of girls from ordinary working families who operated machines or listed endless streams of figures, largely unaware of the major impact their work was having on the war. The Debs of Bletchley Park and Other Stories tells the stories of these women, how they came to be there, the lives they gave up to do 'their bit' for the war effort, and the part they played in the vital work of 'Station X'.

The Girls of Atomic City: The Untold Story of the Women Who Helped Win World War II by Denise Kiernan
In this book the author traces the story of the unsung World War II workers in Oak Ridge, Tennessee through interviews with dozens of surviving women and other Oak Ridge residents. This is the story of the young women of Oak Ridge, Tennessee, who unwittingly played a crucial role in one of the most significant moments in U.S. history.

Headstrong: 52 Women Who Changed Science--And the World by Rachel Swaby
Covering Nobel Prize winners and major innovators, as well as lesser-known but hugely significant scientists who influence our every day, Rachel Swaby's ... profiles span centuries of courageous thinkers and illustrate how each one's ideas developed, from their first moment of scientific engagement through the research and discovery for which they're best known.

Association for Women in Mathematics

Association for Women in Science

Why Are There Still So Few Women In Science? [New York Times]

Women Were Key to WWII Code-Breaking at Bletchley Park [Smithsonian]