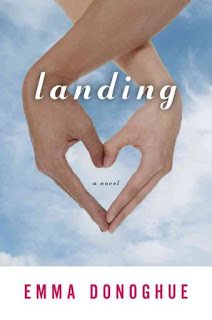 Reading an Emma Donoghue book is like falling into a deep friendship with an unlikely stranger: a lady of the evening, a cross-dressing frogcatcher, an imprisoned child. The author’s empathy for outsiders makes for captivating characters; she illustrates the complex inner lives of her creations with a candor that shows humanity at its best and worst.
~Allie Ghaman, "Why you should give 'Frog Music' authorEmma Donoghue's books a read"

Emma Donoghue is an Irish-born writer currently living in Canada. On her website she proclaims, "From the age of 23, I have earned my living as a writer, and have been lucky enough to never have an ‘honest job’ since I was sacked after a single summer month as a chambermaid." She earlier wanted to be a ballerina, but "This way I get to eat more cake." In a funny twist of fate, she was named for Jane Austen's Emma, though she does not count Austen among her influences. She is a proponent of the treadmill desk.

Her book Room was an international bestseller; shortlisted for the Man Booker and Orange Prize, and winner of  the Hughes & Hughes Irish Novel of the Year, the Rogers Writers’ Trust Fiction Prize, the Commonwealth Prize (Canada & Caribbean Region), and more; and made into an award-winning feature film.

The Woman Who Gave Birth to Rabbits: Stories

Inseparable: Desire Between Women in Literature

How Beautiful the Ordinary: Twelve Stories of Identity [YA]


One Hot Second: Stories About Desire
Posted by abcreader at 8:00 AM